In 1914 British Officer Stewart Gore-Brown bought 10 000 acres of land near a lake, called Ishiba Ng’andu – The lake of the Royal Crocodile. Legend has is that a tribe, originally from Congo, came across a dead crocodile while moving south towards better land. They thought this an excellent omen and inhabited this piece of land.

Coming back after the first Wild War, Stewart started building his exquisite English style manor which was finished in 1932. It didn’t stay with that as he wanted to do something for the community, so he build cottages, a school, a chapel, a hospital, a post office and many more.

Stewart died at the age of 84 and in 1967 his elder daughter and her husband Major Harvey took over management. They began Shiwa Safaris, which still is been run by family. They also continued with the community development projects started by Gore-Brown. They were sadly murdered in their other home near Lusaka in 1992, but the estate still remains with the Harvey family.

After leaving the Great North Road, we drove along a dirt track until we came to a surreal visual, which until now, we had only seen in South-Africa. The scene was old, English countryside brick houses and an avenue of eucalyptus trees leading up to a huge country estate in the middle of Africa. Left and right we found small cottages, where locals resided. We passed an old farm and on the right side we even saw an old English locomotive, which looked very out of place. 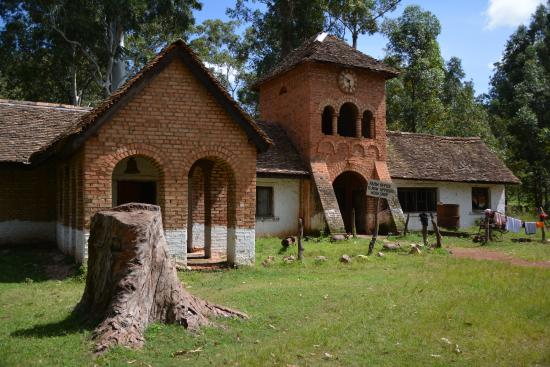 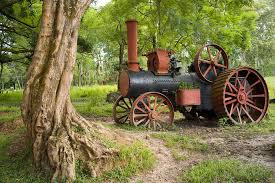 We continued on as we were not going to the estate. We were heading for Kapishya, a beautiful natural hot spring surrounded by lush tropical vegetation and tall palms. The hot water bubbles out from the white sands of a crystal-clear pool and flows into the Manshya River.

We camped along the river and packed out our stuff and when we turned around to see how Jos and Thea were doing, Jos was already gone.

Of course, we knew exactly where he was as the minute we arrived he jumped into his swimming shorts and went for the springs. 5 minutes later we joined in and enjoyed the warm water while sipping on our cold beers.

There are many activities to explore around this area, such as visiting the estate, enjoy the spa or hike through the many small villages and over the hills. There is one hike in particularly that gives a breath-taking view over the land that is owned by the Harvey’s. The hike takes about 2 hours and goes up hill, although it can be tricky to find the right route, even with the map that you can find at the hot springs.

We met Mark Harvey, grandson to Stewart Gore-Brown, a day later and after talking with him for over an hour he made us on offer we couldn’t refuse. Our next stop would be North Luangwa National Park, a park not open to the public and with no permanent lodges. You can only access the park with one of the few safari operators granted permission to conduct safaris and who have mobile lodges set up.

There are very few roads and you are unlikely to see anyone else for the duration of your trip. Like the South Park, it lies on the western bank of the Luangwa River bordered on the other side by the dramatic Muchinga Escarpment which rises over 1.000 meters from the valley floor. The vegetation ranges from woodland to riverine forest, open grasslands and acacia thicket while small rivers divide the area.

Buffalo Camp, run by the Harvey’s, is the first mobile lodge that was allowed to open its doors to tourists. Camping is not allowed so you need to make use of one of the chalets, which are entirely made of straw. Packed in the price is a full board menu and all the ingredients comes from the farm at the Shiwa Ngandu Estate.

Although we left the hot springs on time we still had to speed up as park rangers can be particularly slowly with filling in all the paper work. 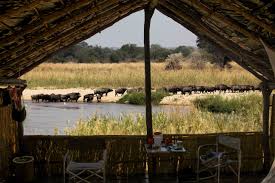 We arrived just barely after 4 o’clock. Mark was already waiting for us to set out for a safari. It wouldn’t be a driving safari, but a walking safari as this would be more thrilling, Mark told us. All four hadn’t experienced this and what better way was there to give more diversity to our trip. With a total of 8 persons, Mark and a ranger packed with a gun, Jos, Thea and us, and two guides, we could start the trip.

The ranger took the lead and we followed up closely, so to form a pack and keep wild animals at bay. A big compact group would be stronger when facing a buffalo, elephant or lion than to be scattered around. Although, even a lonely young male Elephant, can be challenging when facing up close.

“While Mark was loading his gun, the ranger told us to move around towards the river”.

We obediently did what was told and after some scary minutes, even Mark’s hart was skipping a beat, we safely continued.

The sun was already setting in when we reached the pick-up location. Chairs and a table with drinks where already prepared. The evening was closing in as we enjoyed our gin and tonic while a rhino suddenly appeared out of nowhere, on the other side of the river. A great surprise and ending of a wonderful experience.

The next day, we set out again on foot and although Mark told us we would see less animals, we came upon a group of Wildebeest that scattered away when we approached.

The sun was getting warmer and we took shelter at a waterhole, enjoying the shade while animals where taking their turn to drink water. Mark, already ahead of us, had a cool box with cold drinks and an hour passed in silence, viewing the animals doing their thing.

After lunch it was time to say goodbye as we had to exit the park on time. Having our own game drive through the park we slowly drove towards the river. A raft, made of barrels and wood, was waiting for us, to take us to the other side. “Where is the ferry?”, we asked as we didn’t think the raft to be strong enough to hold our 3.5-ton weighted Land Cruiser. With no other way to get to the other side and the ranger confidently telling us that it would be no problem, Inge and Jos slowly drove the car on the raft.

“Driving onto the raft, the first 4 barrels sank under water, and just briefly we saw fear in the eyes of the rangers”.

This was clearly not what they expected. Quick judgement of the rangers and Inge’s sharp sense of danger, Inge accelerated, and a second later Marty was safely on the raft. Clearly relieved the rangers fixed the car onto the raft and with pure manpower pulled the car to the other side of the river.

Jos and his car were second, but it was a breeze compared to us. Safely we both managed to come across. We thanked the guys that helped us and drove to the campsite which was just around the corner. We set up camp and enjoyed the view over the river, thinking back on the scary moments crossing it.

If you are looking for a real adventure, try out North Luangwa. It is still remote and probably one of the few parks where you can experience a safari without the big crowds. Even though you will encounter less wild life due to the vastness of the park, there is much to learn from the bush with Mark as an excellent teacher.

The barren land of Lake Turkana

How to get a visa for Ethiopia?